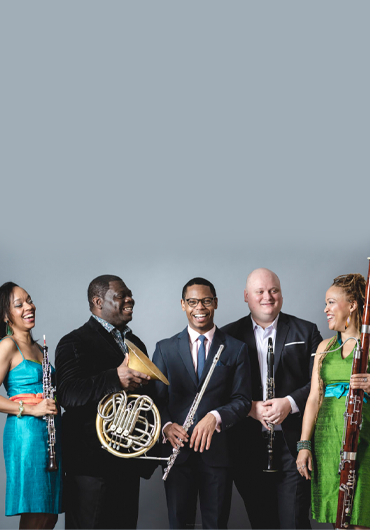 Over the course of their 20+ year career, Grammy-nominated quintet Imani Winds has discovered what audiences value most from their concerts: a sense of connection—with the music, the performers, the composers, the artistry and beyond. Extolled by the Philadelphia Inquirer as “what triumph sounds like,” Imani Winds has created a distinct presence in the classical music world through their dynamic playing, culturally relevant programming, virtuosic collaborations and inspirational outreach programs.

The concept of connectivity has led them to program not only music from the traditional chamber music canon, but also concerts that reach beyond the usual boundaries of the recital stage. Passion for Bach and Coltrane, a concert-length work composed by Imani Winds member Jeff Scott, is an exploration of the two geniuses’ commonality featuring wind quintet, string quartet, jazz trio, and orator. During their multifaceted, two-year residency at the University of Chicago, Imani Winds created a concert specifically to highlight the rich history of the institution and the city, with a focus on today’s social issues featuring a world première by Pulitzer Prize winner and Chicago native Henry Threadgill.

Upcoming seasons include premieres of three new works: Jessie Montgomery’s piece inspired by her great-grandfather’s migration from the south to the north of the United States; music from Andy Akiho designed to be played not only on a concert stage but also outside of an immigrant detention center, and Miguel del Aguilaís piece about the brief Afro-Brazilian nation-state in 1600’s Brazil.

Imani Winds seamlessly navigates between classical, jazz and world music idioms. Through jazz legend Wayne Shorter’s Terra Incognita — his first-ever composition for an ensemble outside of his own — Imani Winds went on to perform lengthily with Shorter at major European and North American festivals such as the North Sea and Montreal Jazz Festivals. On Shorter’s acclaimed release on Blue Note, Without a Net, Imani Winds are prominently featured. The group’s Chamber Music Society of Lincoln Center residency culminated in a recital in New York’s Alice Tully Hall with renowned clarinetist/saxophonist/composer Paquito D’Rivera. The ensemble has also worked with luminaries such as bandoneonist Daniel Binelli, the Brubeck Brothers, the Fisk Jubilee Singers, clarinetist David Shifrin, and pianists Gilbert Kalish, Stephen Hough, Anne-Marie McDermott and Shai Wosner. Their ambitious project, Josephine Baker: A Life of Le Jazz Hot! brought chanteuse René Marie with them to New York, Pittsburgh, San Francisco, Los Angeles, and St. Louis’

Imani Winds enjoy frequent national exposure in all forms of media, including features on NPR’s All Things Considered, appearances on APM’s Saint Paul Sunday and Performance Today, BBC/PRI’s The World, as well as frequent coverage in major music magazines and newspapers including the i and Wall Street Journal. The group maintains an ongoing relationship with Sirius-XM and has been featured multiple times on various channels.

Imani Winds first came to prominence at the 2001 Concert Artists Guild International Competition, where they were selected as the first-ever Educational Residency Ensemble, in recognition of not only their musical abilities but their connection with audiences of all ages. To this day, Imani Winds’ commitment to education runs deep. The group participates in residencies throughout the U.S., giving master classes to thousands of students a year. In the summer of 2010 the ensemble launched its annual Imani Winds Chamber Music Festival (IWCMF). The Festival brings together young instrumentalists and composers from across North America and beyond for intense workshops in entrepreneurship as well as explorations and performance of traditional and new chamber music compositions. Festival participants have gone on to successes around the world, ranging from winning positions in orchestras, founding their own music educational programs, winning college professorships, and forming their own chamber music ensembles.

Imani Winds have six releases on Koch International Classics and E1 Music, including their Grammy Award nominated recording, The Classical Underground. They have also recorded for Naxos and Blue Note and released The Rite of Spring on Warner Classics which was on iTunes Best of 2013 list. In 2018 they were featured on pianist, Edward Simon’s latest recording project: Sorrows and Triumphs.

In 2016 Imani Winds received their greatest accolade to date: they are on permanent display in the classical music section of the Smithsonian’s National Museum of African American History and Culture.

New York-based flutist Brandon Patrick George has appeared with many of the world’s leading ensembles including the Los Angeles Philharmonic, the Pittsburgh Symphony Orchestra, and the International Contemporary Ensemble (ICE). He has appeared at Alice Tully Hall, Cité de la Musique, The Kennedy Center, the Metropolitan Museum of Art, and is a frequent recital artist at Bargemusic in New York. An avid chamber musician, Brandon has collaborated with members of the New York Philharmonic, the Jasper String Quartet, and has performed live on New York’s WQXR with harpist Bridget Kibbey.

With the LA Phil, Brandon has performed at Walt Disney Concert Hall, and at the Hollywood Bowl, under conductors Gustavo Dudamel, Karina Canellakis, and Ludovic Morlot. Brandon has toured the U.S. and Europe with ICE, appearing at Brooklyn Academy of Music (BAM), the Museum of Contemporary Art (Chicago), the Park Avenue Armory (NYC), and the Huddersfield Contemporary Music Festival in England. His live performances with ICE have been heard worldwide on BBC Radio 3. Brandon’s debut album featuring works by Aho, Bach, Boulez, and Prokofiev will be released by Haenssler Classics this autumn.

Brandon is a graduate of the Oberlin Conservatory of Music at Oberlin College. He received his Master of Music degree from the Manhattan School of Music, and won the Manhattan School of Music’s Concerto Competition. At the invitation of Sophie Cherrier, Brandon continued his studies in France at the Conservatoire de Paris (Conservatoire National Supérieur de Musique de Paris).

Toyin Spellman-Diaz has built a reputation as a world-class oboist. As an orchestral musician, Ms. Spellman-Diaz has performed in the New York Philharmonic, the Chicago Symphony, the Chicago Civic Orchestra, the Milwaukee Symphony, the American Symphony Orchestra, the Brooklyn Philharmonic, Orpheus and Orchestra of St. Lukes. She has performed numerous solo works with the Chicago Civic Orchestra, Manhattan Virtuosi, the Antara Ensemble and at the Kennedy Center in Washington, DC where she was hailed as having a “smooth, controlled tone and excellent technique” by the Washington Post.

Her chamber music credits outside of Imani Winds include playing with such esteemed groups as Alarm Will Sound and Camerata Pacifica. Ms. Spellman-Diaz graduated from the Oberlin Conservatory where she achieved her Bachelor of Music degree, and received her Masters and Professional Studies degrees from Manhattan School of Music. She is on faculty at Brooklyn College.

A native of Queens, NY, Jeff Scott started the French horn at age 14, receiving an anonymous gift scholarship to go to the Brooklyn College Preparatory Division. An even greater gift came from his first teacher, Carolyn Clark, who taught the young Mr. Scott for free during his high school years, giving him the opportunity to study music when resources were not available. He received his bachelor’s degree from Manhattan School of Music (studying with David Jolley), and master’s degree from SUNY at Stony Brook (studying with William Purvis). He later continued his horn studies with Scott Brubaker and the late Jerome Ashby. Mr. Scott’s performance credits are many and varied. They include The Lion King orchestra (on Broadway, New York) 1997-2005, and the 1994 revival of Showboat 1994-1997. He has been a member of the Alvin Ailey and Dance Theater of Harlem orchestras since 1995 and has performed numerous times under the direction of Wynton Marsalis with the Lincoln Center Jazz Orchestra.

Mr. Scott has also experienced good fortune as a studio musician. He can be heard on movie soundtracks scored by Terrence Blanchard, Tan Dun and on commercial recordings with notable artists such as Chick Corea, Wayne Shorter, Chris Brubeck, Chico O’Farill, Robin Eubanks, Freddy Cole and Jimmy Heath, among others. Additionally, he has toured with artists such as Barbra Streisand and the late Luther Vandross.

Mr. Scott’s arranging and composing credits are many, and include scoring the off-Broadway production of Becoming Something, The Canada Lee Story, the staged production of Josephine Baker: A Life of Le Jazz Hot!, and many original works for solo winds as well as wind, brass and jazz ensembles. His works are published by International Opus, Trevco Music, To The Fore Music and self-published at Music by The Breadman.

Mr. Scott has been on the horn faculty of the music department at Montclair State University (New Jersey) since 2002.

Praised by Opera News for his “exemplary clarinet playing,” Mark Dover’s vast array of musical experiences have helped him quickly establish himself as one of the most diverse clarinetists of his generation. Since moving to New York in 2010 Mark has performed at many of the major concert halls, including Carnegie Hall and Weill Recital Hall, Avery Fisher Hall, Alice Tully Hall, Brooklyn Academy of Music, Merkin Hall and Symphony Space. As an orchestral musician, Dover has performed with The Detroit Symphony under Leonard Slatkin, The Cleveland Orchestra under David Zinman at Kent/Blossom, numerous times with The New World Symphony in Miami Beach, Symphony in C in New Jersey, and Chamber Orchestra of New York. He has performed as a member of The Spoleto Festival USA Orchestra in Charleston, South Carolina for two seasons, as well as at the Pacific Music Festival in Sapporo, Japan. In 2015, Mark performed the world première of Michael Thurber’s Quadruple Concerto, Three Musketeers commissioned by and broadcast nationally on NPR’s From The Top with the Interlochen Arts Academy Orchestra and soloists Kris Bowers, Charles Yang and Michael Thurber. Mark has also worked closely with the New York based conductor-less chamber orchestra Shattered Glass, with whom he performed Copland’s Clarinet Concerto.

In addition to his work in the classical world, Dover has an extensive background in jazz and improvised music. He held the clarinet chair for over 300 performances of the acclaimed off-Broadway musical Natasha, Pierre, and The Great Comet of 1812. Currently Mark can frequently be heard as a substitute musician on the Broadway show Matilda. He has performed and/or recorded with numerous jazz, pop and musical theatre artists, including The Temptations, Vulfpeck, Bernard Purdie, Edward Simon, Brian Blade, Dave Binney, Scott Colley, Cyrille Aimée, Darren Criss, Dave Malloy, Phillipa Soo, Stephen Pasquale, Adam Deitch, Michael Thurber, Charles Yang, and many more. Originally from Ann Arbor, Michigan, and a graduate of Interlochen Arts Academy, Mark received his Masters of Music from Manhattan School of Music, and his Bachelor of Music from the University of Michigan School of Music, Theatre, and Dance. His major teachers include David Krakauer, Deborah Chodacki, Nathan Williams, and Jay DeVries.

Bassoonist Monica Ellis, a native of Pittsburgh, PA, discovered the joy of making music at the age of four. Encouraged by her father, the late jazz saxophonist Clarence Oden, she began playing the clarinet, saxophone and later the piano. After being introduced to the bassoon in middle school, she studied with Mark Pancerev of the Pittsburgh Symphony throughout high school.

Ms. Ellis went on to receive her Bachelor of Music degree from Oberlin College Conservatory of Music, studying with George Sakakeeny. While at Oberlin she participated as both an instructor and performer in the Panama Project; a month long camp for young Panamanian students. She then received her Master of Music degree from The Juilliard School and also attended Manhattan School of Music in the Orchestral Performance Program, studying with Frank Morelli at both institutions.

Also a passionate teacher, she has taught at Conservatories of Music at Purchase College and Brooklyn College, Mannes College of Music Preparatory Division and Juilliard’s Music Advancement Program. She is also a well renowned clinician, and has given masterclasses and solo recital performances across the country.