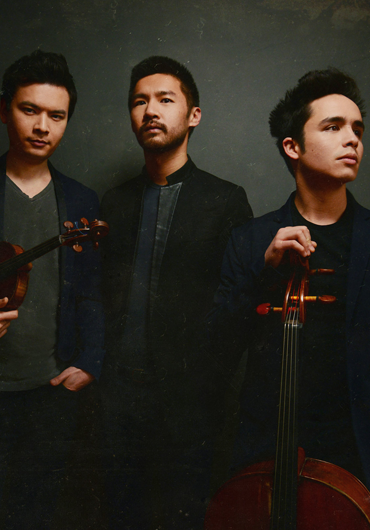 Three renowned visionary artists of the next generation combine talents in this eclectic new piano trio, JCT (pronounced ‘junction’). Violinist Stefan Jackiw, recognized for musicianship that combines poetry and purity with an impeccable technique, returns with pianist Conrad Tao and cellist Jay Campbell. Tao, who appears worldwide as a pianist and composer, has been dubbed a musician of “probing intellect and open-hearted vision” by the New York Times. Approaching both old and new works with the same curiosity and emotional commitment, Campbell has been called “electrifying” by the New York Times. Recent concerts of the trio have included performances at Washington Performing Arts, Portland Ovations and The Royal Conservatory in Toronto.

Hailed for playing of “uncommon musical substance” that is “striking for its intelligence and sensitivity” (Boston Globe), Stefan Jackiw has appeared as soloist with the Boston, Chicago, Cleveland, New York, Philadelphia, and San Francisco symphony orchestras, among others.

Last season Stefan Jackiw performed Prokofiev’s Second Violin Concerto at Carnegie Hall with Mikhail Pletnev, before embarking on a multi-city tour with the Russian National Orchestra. He also appeared in recital with acclaimed pianist Jeremy Denk performing Ives Violin Sonatas. In Europe, Stefan returned to Amsterdam’s Concertgebouw with the Netherlands Radio Philharmonic, and made his debut with Orchestre Philharmonique du Luxembourg. And in Asia, he appeared for the first time with the Tokyo Symphony at Suntory Hall under the direction of Krzysztof Urbanski, and returned to the Seoul Philharmonic under Mario Venzago. He also toured Korea, playing chamber music with Gidon Kremer and Kremerata Baltica.

Armed with a diverse spectrum of repertoire and eclectic musical interests, cellist Jay Campbell has been recognized for approaching both old and new works with the same probing curiosity and emotional commitment. His performances have been called “electrifying” by the New York Times; “gentle, poignant, and deeply moving” by the Washington Post; and on WQXR by Krzysztof Penderecki for “the greatest performance yet of Capriccio per Sigfried Palm”. A 2016 recipient of the prestigious Avery Fisher Career Grant, Jay made his debut with the New York Philharmonic in 2013 and worked with Alan Gilbert in 2016 as the artistic-director for Ligeti Forward, a series featured on the New York Philharmonic Biennale at the Metropolitan Museum of Art. In 2017, he will be Artist-in-Residence at the Lucerne Festival with violinist Patricia Kopatchinskaja, where he will give the Swiss premiere of Michael Van der Aa’s multimedia cello concerto Up-Close, and the world premiere of a new concerto by Luca Francesconi, conducted by Matthias Pintscher in Lucerne’s KKL Auditorium and the Cologne Philharmonie.

Dedicated to introducing audiences to the music of our time, Jay has worked closely with some of the most creative musicians of our time including Pierre Boulez, Elliott Carter, Matthias Pintscher, John Adams, Kaija Saariaho, and countless others from his own generation. Forthcoming discs include George Perle’s cello concerto with the Seattle Symphony and Ludovic Morlot (Bridge).

Conrad Tao has appeared worldwide as a pianist and composer and has been dubbed a musician of “probing intellect and open-hearted vision” by the New York Times, a “thoughtful and mature composer” by NPR, and “ferociously talented” by TimeOut New York. In June of 2011, the White House Commission on Presidential Scholars and the Department of Education named Tao a Presidential Scholar in the Arts, and the National Foundation for Advancement in the Arts awarded him a YoungArts gold medal in music. Later that year, Tao was named a Gilmore Young Artist, an honor awarded every two years highlighting the most promising American pianists of the new generation. In May of 2012, he was awarded the prestigious Avery Fisher Career Grant.

Tao’s 2017-18 season includes his Lincoln Center debut with a solo recital including a work by American composer Jason Eckhardt, a residency with the Utah Symphony performing both Bernstein’s Age of Anxiety and Prokofiev’s Piano Concerto No. 2, and debut engagements with the Atlanta Symphony, New Jersey Symphony, and Seattle Symphony. Tao will both perform in his own recital and have a new work composed for Paul Huang and Orion Weiss performed at Washington Performing Arts Society, and opens the ProMusica Chamber Orchestra’s season with the world premiere of a new commissioned work, Over. Additionally, a new multimedia work, Ceremony, developed with vocalist Charmaine Lee, will receive its premiere at Brooklyn’s Roulette.