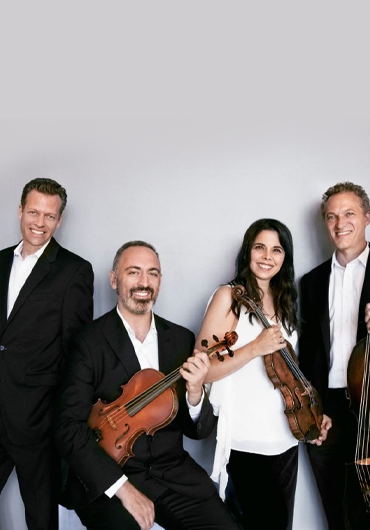 Recognized for its virtuosity, exuberant performance style, and often-daring repertory choices, over the past twenty-five years the Pacifica Quartet has achieved international recognition as one of the finest chamber ensembles performing today. Named the quartet-in-residence at Indiana University’s Jacobs School of Music in March 2012, the Pacifica was previously the quartet-in-residence at the Metropolitan Museum of Art and received a Grammy Award for Best Chamber Music Performance. In 2017, the Pacifica Quartet was appointed to lead the Center for Advanced Quartet Studies at the Aspen Music Festival and School.

Formed in 1994, the Pacifica Quartet quickly won chamber music’s top competitions, including the 1998 Naumburg Chamber Music Award. In 2002 the ensemble was honored with Chamber Music America’s Cleveland Quartet Award and the appointment to Lincoln Center’s The Bowers Program (formerly CMS Two), and in 2006 was awarded a prestigious Avery Fisher Career Grant. Also in 2006 the Quartet was featured on the cover of Gramophone and heralded as one of “five new quartets you should know about,” the only American quartet to make the list. And in 2009, the Quartet was named “Ensemble of the Year” by Musical America.

The Pacifica Quartet has carved a niche for itself as the preeminent interpreter of string quartet cycles, harnessing the group’s singular focus and incredible stamina to portray each composer’s evolution, often over the course of just a few days. Having given highly acclaimed performances of the complete Carter cycle in San Francisco, New York, Chicago, and Houston; the Mendelssohn cycle in Napa, Australia, New York, and Pittsburgh; and the Beethoven cycle in New York, Denver, St. Paul, Chicago, Napa, and Tokyo (in an unprecedented presentation of five concerts in three days at Suntory Hall), the Quartet presented the monumental Shostakovich cycle in Chicago, New York, Montreal and at London’s Wigmore Hall. The Quartet has been widely praised for these cycles, with critics calling the concerts “brilliant,” “astonishing,” “gripping,” and “breathtaking.” In the 2018–2019 season, the Pacifica Quartet continues its exploration of the Beethoven cycle at the National Arts Centre (Ottawa) and for the Portland Friends of Chamber Music and the Shostakovich cycle for Chamber Music San Francisco and Skidmore College.

Other season highlights include performances at Shriver Hall with Marc-André Hamelin, a Florida tour together with Sharon Isbin, and appearances on North America’s major chamber-music series, including concerts in Chicago, Dallas, Detroit, Kansas City, and Vancouver.

An ardent advocate of contemporary music, the Pacifica Quartet commissions and performs many new works including those by Keeril Makan and Shulamit Ran, the latter in partnership with the Music Accord consortium, London’s Wigmore Hall, and Tokyo’s Suntory Hall. The work—entitled Glitter, Doom, Shards, Memory—had its New York debut as part of the Chamber Music Society at Lincoln Center series.

In 2008 the Quartet released its Grammy Award-winning recording of Carter’s quartets Nos. 1 and 5 on the Naxos label; the 2009 release of quartets Nos. 2, 3, and 4 completed the two-CD set. Cedille Records recently released the third of four volumes comprising the entire Shostakovich cycle, along with other contemporary Soviet works, to rave reviews: “The playing is nothing short of phenomenal.” (Daily Telegraph, London) Recent projects include recording Leo Ornstein’s rarely-heard piano quintet with Marc-André Hamelin with an accompanying tour, the Brahms piano quintet with the legendary pianist Menahem Pressler, and the Brahms and Mozart clarinet quintets with the New York Philharmonic’s principal clarinetist, Anthony McGill.

The members of the Pacifica Quartet live in Bloomington, Indiana, where they serve as quartet-in-residence and full-time faculty members at Indiana University’s Jacobs School of Music. Prior to their appointment, the Quartet was on the faculty of the University of Illinois at Champaign–Urbana from 2003 to 2012, and also served as resident performing artist at the University of Chicago for seventeen years.

The Pacifica Quartet is endorsed by D’Addario and proudly uses their strings.

Simin Ganatra, violin, has won wide recognition for her performances throughout the United States and abroad. She has been described by critics as an “excellent and unique violinist” and heralded for “creating a miraculous sense of flow and otherworldly beauty.” She has performed in such prestigious venues as Lincoln Center’s Alice Tully Hall, the Corcoran Gallery, and Carnegie’s Weill Recital Hall. Collaborations include performances with Michael Tree, Toby Hoffman, and the St. Lawrence Quartet. She is the recipient of several awards and prizes, including the Naumburg Chamber Music Award, top prizes at the Concert Artists Guild Competition and the Coleman Chamber Music Competition, and first prizes in the Union League of Chicago Competition, the Pasadena Instrumental Competition, the Minnesota Sinfonia Competition, and the Schubert Club Competition. Originally from Los Angeles, Ganatra studied with Idell Low, Robert Lipsett, and most recently Roland and Almita Vamos. She is a graduate of the Oberlin Conservatory, where she was concertmaster of the Oberlin Conservatory Orchestra and recipient of the Louis Kaufman Prize for outstanding performance in chamber music. She is currently on the faculty of Indiana University’s Jacobs School of Music and the University of Chicago.
Austin Hartman, violin, has distinguished himself as a chamber musician and soloist with performances throughout the United States and abroad. He has appeared to acclaim in prestigious venues throughout North America, Europe, and Asia, including Alice Tully Hall, Carnegie Hall, the Library of Congress, the Kennedy Center, Wigmore Hall, Jazz at Lincoln Center, and the Baroque Art Hall in Seoul. As a soloist, Austin was the winner of the Stulberg International Competition and made two solo appearances with the Philadelphia Orchestra. He has collaborated with acclaimed artists including members of the Cleveland, Shanghai, Tokyo, Vermeer, and Juilliard Quartets as well as Orli Shaham and Mark Kosower. As the first violinist of the Biava Quartet, an ensemble of which he was a founding member, he was the winner of the Naumburg Award that also captured top prizes at the Premio Borciani and London International Competitions. He has recorded for the Albany, Naxos, and Cedille labels, and has been heard on London’s BBC Radio 3. Austin has served on the faculty of numerous festivals including Brevard Music Center, Great Lakes Chamber Music Festival, Innsbrook, Heifetz International Music Institutes, and the Luzerne Music Center. Prior to joining the Pacifica Quartet, Austin served as the Assistant Professor of Violin at the University of Indianapolis. He has earned Artist Diplomas from both the Juilliard School and Yale School of Music as well as degrees from the New England Conservatory and Cleveland Institute of Music.
Violist Mark Holloway is a chamber musician sought after in the United States and abroad. He is a member of the Pacifica Quartet, in-residence at the Jacobs School of Music at Indiana University Bloomington, where he is a member of the faculty. An artist of the Chamber Music Society of Lincoln Center, he has appeared at prestigious festivals and series such as Marlboro, Music@Menlo, Ravinia, Caramoor, Banff, Taos, Music from Angel Fire, Mainly Mozart, Alpenglow, Plush, Whittington, Olympic, Concordia Chamber Players, Kon-Tiki, Bay Chamber Concerts, and with the Boston Chamber Music Society. Performances have taken him to such far-flung places as Chile and Greenland, and he plays regularly at chamber music festivals in France, Musikdorf Ernen in Switzerland, and at the International Musicians Seminar in Prussia Cove, England. He has frequently appeared as a guest with the New York Philharmonic, Orpheus, and the Metropolitan Opera orchestras. Mr. Holloway has been principal violist at Tanglewood and of the New York String Orchestra, and he has played as a guest with the Boston Symphony and guest principal of the American Symphony, Riverside Symphony, Chamber Orchestra of Philadelphia, Camerata Bern, American Ballet Theatre Orchestra, and St. Paul Chamber Orchestra. He has performed at Bargemusic, the 92nd Street Y, the Casals Festival in Puerto Rico, Tertulia, the Cartagena International Music Festival, with the Israeli Chamber Project, Chameleon Arts Ensemble, NOVUS NY, Emerald City Music, and on radio and television throughout the Americas and Europe, most recently a Live From Lincoln Center broadcast. Hailed as an “outstanding violist” by American Record Guide, and praised by Zürich’s Neue Zürcher Zeitung for his “warmth and intimacy,” he has recorded for the Marlboro Recording Society, CMS Live, Music@Menlo LIVE, Naxos, and Albany labels. Mr. Holloway was a student of Michelle LaCourse at Boston University, where he received his B.M. Summa cum laude, and he received his Diploma from the Curtis Institute of Music as a student of Michael Tree.
Brandon Vamos, cello, has performed solo and chamber music recitals both in the U.S. and abroad to critical acclaim. Called a “first-rate cellist” by the Chicago Reader and praised for his “gutsy bravura” by the Chicago Tribune, Mr. Vamos has appeared as soloist with orchestras worldwide, including performances with the Taipei City Symphony, the Suwon Symphony in Seoul, the Samara Symphony in Russia, and the New Philharmonia Orchestra, and the Elgin Symphony Orchestra. Mr. Vamos has collaborated with many distinguished artists, including Paul Katz, Michael Tree, Yo-Yo Ma, Menahem Pressler, and the Emerson Quartet, and has recorded for Cedille, Naxos, and Cacophony Records. Awarded a Performer’s Certificate at the Eastman School of Music, where he earned a Bachelor’s of Music Degree as a student of Mr. Katz, Mr. Vamos has also studied with distinguished artists such as Tanya Carey in Macomb, Illinois, and Aldo Parisot at Yale University, where he earned a Master of Music Degree. As a member of the Pacifica Quartet, with whom he performs over 90 concerts a year, he won a 2009 Grammy Award for Best Chamber Music Performance and the Cleveland Quartet Award, in addition to being named Musical America’s 2009 Ensemble of the Year.
Visit Group's Website